I have used Crik for about 3 years now. I religiously use it as a shake that I add some frozen fruit to every morning. When I go on vacation I usually take it with me and put some in a shaker cup with water.
I like the taste and I love that it is so good for you. It's an organic whole food that especially is a great source of protein. It's great for a metabolism boost in the morning, and if you eat other healthy Whole Foods and exercise, it helps take off fat and add lean muscle mass. I lost a total of 70 pounds starting in 2008 until 2010. Crik is part of my daily routine that helps keep that weight off and keeps me healthy. 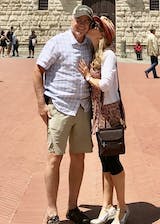 Thanks so much for the thoughtful review Mary! I'm so glad to hear how our protein is a helpful piece in all your goals!
T
Sweet Vanilla T.S.
The wave of the future

I've been putting Crik in my oatmeal and mixing with yogurt/condiments to ma me my own protein bars for snacks.

Thanks for taking the time to leave a review Ted! If you have any recipes you want to share, shoot us an email!
J
Chocolate & Sweet Vanilla (Combo) J.C.
Crik Choc and Vanilla

I am enjoying the cricket powder as a breakfast pre-workout smoothie. It sustains me for many hours, yet leaves me feeling light, as if I'm not having to work to digest. I would recommend it. Thumbs up!

Thanks for the review Dorian! The lightness after having a cricket shake is what make me really get behind this stuff before I started the company and was just experimenting at home. Thanks again!
P
Sweet Vanilla P.
Love it!

I'm so excited to be sharing my love of this protein powder. Very delicious and satisfying.

Thanks for the review!!!
123
Powered by Judge.me
Reviews | CRIK Nutrition

What People Are Saying About Crik

I still get nervous for some reason when people are trying Crik for the first time which is crazy because we get sooo much amazing feedback.

It seems like everyday I'm getting Texts, DM's, Emails, or Reviews that make all the struggle of starting a company worth it.

You'll see all these different reviews and feedback first and the video taste tests are near the bottom of the page.

Of course our product isn't for everyone, but after 1 year there still has only been 1 person that didn't like their Crik and asked for a refund.

Below is a sample of some of the great feedback we've been getting and there seems to be a trend.

"Tastes amazing even with just water!"

"Best tasting protein I've EVER had!" I do give out my personal number a lot which means once in a while I get kickass text like the ones below here.

There's nothing that puts a huge smile on my face and makes for an awesome day like getting one of these texts or even sometimes calls from people that just tried Crik for the first time and love it so much they have to reach out.

"Best tasting protein [i] have tried." Here's a mix of reviews from our different proteins as well as a couple general reviews about our customer service.

"Love this protein more than any other I've ever tried."

"Been taking protein for 5 years and this is the best" I like to reach out to people a lot.

That's what helped make the changes from our first original vanilla to the sweet vanilla protein.

"This stuff is delicious."

"This is the best protein you can get." All of these videos are done by real people I've just met for the first time and they have never tried the product before.

It always makes me nervous as I mentioned and a lot of the time people don't make a face at all, but it turns out it's because they were preparing for something weird and when it turns out normal they're shocked and stop for a minute to wait for an after taste or anything out of the ordinary.

These taste tests happened while at a startup event and happened to be on the same day our Indiegogo launched which exceeded our goal in the first 24 hrs.

People were skeptical but having had success that day they all gave it a try.
Many of them admitting they don't usually like protein powder or that Crik is better than the stuff they use regularly.

"This is better than the stuff I'm drinking now"

"Tastes better than my protein."

Below is a taste test from a couple local crossfit boxes in Winnipeg, Canada.

You might see the look on Rob's face on our freeze frame there but it's actually because he can't believe how good it tastes.

Rob is actually one of our top customers and uses our protein powder every single day to fuel his workouts.

This taste test is with Kevin from the CJOB 680 radio show.

It reminds me of the first time I did a TV show on our big local channel.

Before the show started Brittany asked if I brought any to show the viewers and I told her she was going to have to try it on air.

She said that if that's how we were going to do it she would have to be brutally honest about what she thought.

There's a video of that available here:  Global News Morning Show
(tried to embed the video but it doesn't work)

This was while the product was still underdevelopment and I was given the opportunity to attend our provincial bodybuilding show and set up a booth for free.

Turns out a legend in the bodybuilding space was there and wanted to give our protein a try.

He usually doesn't support supplements and promotes more whole food products which is why he liked the idea of Crik.  Our main ingredient is a whole food. ——
If you're still not sure check out our Why Crickets page

This page covers the big points of sustainability, nutrients, and ethics of eating insects, as well as digs into why you're already eating lots of bugs without even know it.